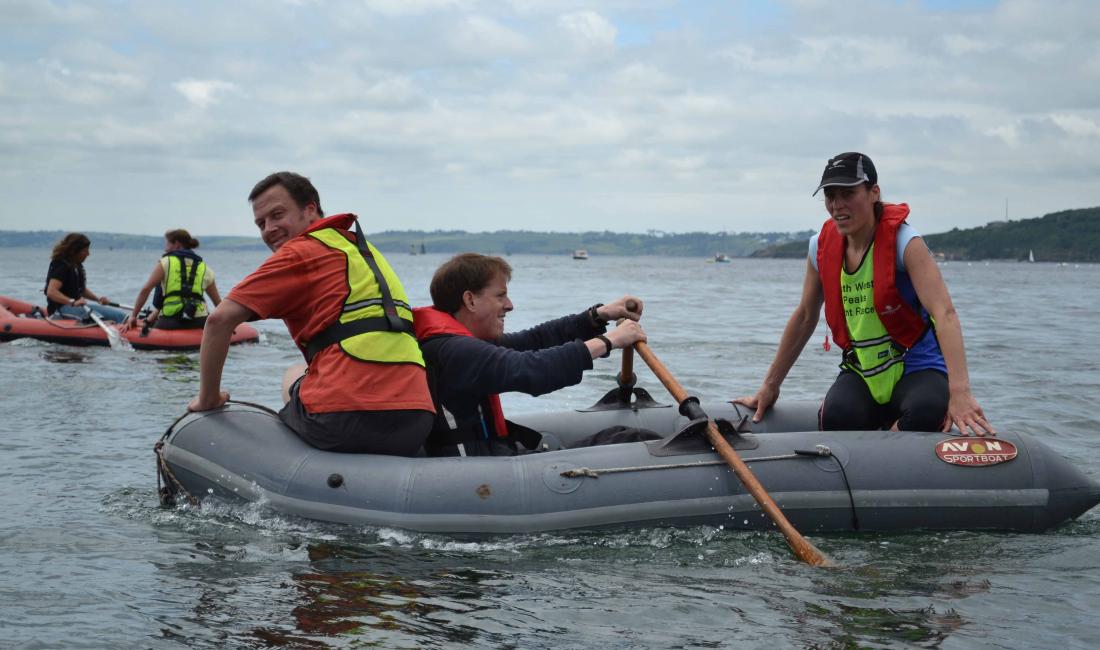 Changes for 2019:  The Plymouth stop will return to QAB (Queen Anne's Battery).  We will use the YTC handicap system for the sailing legs.

What are the course changes for 2016 (these changes will be kept for 2017)?
The CHANGES TO SAILING ROUTE are:
Leg 3 is now from Fowey to Plymouth without any need to go around Eddystone lighthouse.
An additional Leg 4 is added:
Leg 4 - Plymouth to Eddystone lighthouse and back, this leg has special rules in that the crew of the yacht does not include all the crew as 2 crew members have been dropped off to go to Yes Tor and back.
CHANGES TO LAND LEG 4 - Cyclists must use Sustrans Route 27 only as far as Tavistock, once there they can use the A386 to get to Meldon Resevoir.

What would be the most suitable Bike?
The cycling is mostly on country lanes and tarmaced bicycle track. I would recommend a road bike with puncture resistant tyres (I use Armadillo Specialised, but there are others). The routes are hilly so good brakes and a decent bottom gear (or very strong legs, or both!) will help.  A mountain bike would be ok but slow!  A time trial bike would not be suitable.  The last bike ride Plymouth to Okehampton has some rough sections everyone used road bikes in 2013, but some competitors thought that a wider than standard road tyre would be more appropriate.  It is very likely that you will be doing some cycling at night, the Plymouth to Okehamton route is particularly tricky so I recommend that you have the best possible lights (lots of Lumens!).

Will my bike be secure while I do the run?
We will have Marshalls at the "Bike Parks" so your bikes will be safe.

Do we need a land based support Crew?
Most crews do persuade someone to transport their bikes about, however it is perfectly allowable and possible to transport your bikes on your yacht.  Yachts can go alongside at all the stops so that bikes can be unloaded.  The 2015 and 2016 races were won by a crew who did not have a support crew and carried their bikes on the boat.  If your boat is too small to carry bikes and you are struggling with finding a support crew talk to the race organiser (Tim) and he may be able to arrange help.

What will the tide be doing around the Lizard?
The tide should be in your favour as you round the lizard (Check tide tables) . In fact the race start time has been moved forward this year (2017) to 10:00 so that yachts should be able to get around the Lizard before the tide turns at 15:00.  In the right weather conditions the "inshore passage" may be a good option.  We highly recommend Admiralty Chart 2345 if you are considering this option.

Rules Governing Crews
Crews must be made up of 4, 5 or 6 people (6 is recommended).  The running and cycling can be done by 2 or more of the crew. Each crew must get 2 crew members to each peak.  We will be giving a prize for the fastest crew that puts all of their crew on the top of at least one "Peak" and for the fastest crew that uses the same  2 crew for all the land challenges.
One member of every crew must be nominated the skipper. The skipper of the yacht will be responsible for the yacht and his crews' safety while at sea.

Age Rules
Crew must be 16 or over on the day of the race, the skipper must be over 18, any crew under 18 doing one of the "Peaks" must be accompanied by an over 18 crew member.

Handicaping
We will use the YTC  handicap system. If boats do not have a YTC number then we ask for a number of measurements and calculate the number.

Cycle Navigation
There are gpx files available for the three cycle routes.